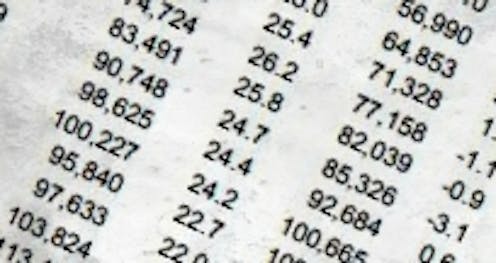 Thursday’s economic statement is the government’s first attempt to quantify the impact of the coronavirus pandemic on government finances and should be treated with caution.

The near A$300 billion[1] hit to government finances over two years is, as the treasurer says “eye-watering”, but that forecast is as good as it’s going to get.

We should be prepared for much bigger deficits than predicted this financial year and potentially a very large deficit once again in 2021-22.

This is fine. With government debt projected to rise to 45% of GDP over the year ahead, we’ve still plenty of “fiscal space”; that is, room for the government to spend more in order to ensure a recovery.

The average debt level across members of the Organisation for Economic Co-operation and Development is 100% of GDP.

Optimistic about both health and the economy

That’s the relatively good news. The bad news is these numbers are based on something close to a best-case scenario. If they change, there is very little chance it will be for the better. We would need to see something like a near-immediate discovery of a vaccine and its distribution within months.

Read more: These budget numbers are shocking, and there are worse ones in store[3]

The list of things that could go wrong is much longer, chief among them continued outbreaks and lockdowns like the one in Melbourne and worse news from overseas.

Given these assumptions, the short-term economic forecasts are reasonable and not too far out of line with what would be the consensus of economists.

Read more: Budget deficit to hit $184.5B this financial year, unemployment to peak at 9.25% in December: economic statement[4]

But unemployment typically peaks at about 11% in a recession, and the government itself has said that taking hidden employment into account the rate is probably closer to 13%.

With the virus running riot across the Americas and surging in Africa the downside risks outweigh the others. The treasury forecasts eschew the traditional approach of charting a middle path through upside and downside risks.

But finances aren’t a problem

The update is telling us the pandemic will cost the government about $300 billion over the two years.

The eventual number is likely to be much higher, by 2022 probably closer to half a trillion dollars. It is a perfectly reasonable sum.

Even if the deficits and debt associated with the pandemic end up being twice what the government is projecting our government debt will still be just over 60% of GDP, a level that would be the envy of most other countries, many of which don’t have the potential to grow and recover that Australia does.

For our government, the investment is well worth the money.