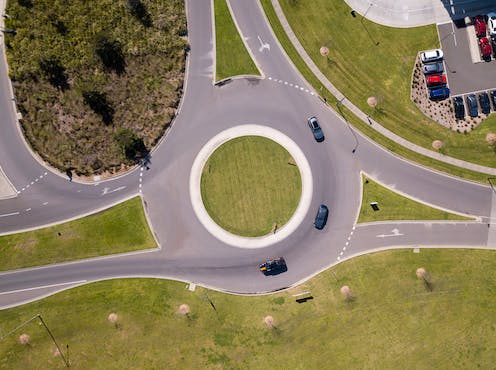 Brace for the federal election – the transport promises have begun. Some are pretty big, such as Deputy Prime Minister Barnaby Joyce’s A$678 million for the Outback Highway[1], and Opposition leader Anthony Albanese’s $500 million down-payment on faster rail[2] between Newcastle and Sydney. If history is any guide, a rush of small local promises won’t be far behind.

Under the two most recent Labor terms of government, each electorate received an average of $26 million worth of small transport projects (projects worth up to $10 million each) per year. In the following three Coalition terms, that number increased tenfold to $264 million per electorate per year, on average.

But just because there’s more spending on small local projects, does it follow that it’s partisan political spending, or “pork-barrelling”? This new report shows what really matters is whether or not the money is allocated under objective, transparent criteria.

One part of the Urban Congestion Fund, the $660 million commuter carpark fund, attracted public interest after the auditor-general published a scathing report on it last year. Shutterstock

The Black Spot program helps fund road-safety initiatives. To be eligible for funding, initiatives must have a benefit-to-cost ratio of at least 2-to-1, and the site must have a history of at least three casualty crashes in the past five years. The program was worth $104 million in 2020–21.

Roads to Recovery helps fund maintenance of local roads. The federal government provides funding to all local councils, using a formula based on population and road length. The program was worth $592 million in 2020–21.

Both programs are designed to favour rural and remote electorates. And that’s what’s happened under both Labor and Coalition governments, even though rural and remote seats are mostly held by the Coalition, often very safely.

In contrast, the $4.9 billion Urban Congestion Fund[7] does not have eligibility criteria on its website. It’s the clearest case of a slush fund on the federal government’s books.

One component of the Urban Congestion Fund, the $660 million commuter carpark fund, has attracted significant public interest since the auditor-general published a scathing report[8] on it last year. But the allocation of the remaining $4.2 billion has received less attention.

Grattan Institute’s latest report[9] shows marginal seats clearly get a bigger share of funds than safe seats under the Urban Congestion Fund. More funding has gone to the most marginal seats, such as Lindsay in Sydney, Higgins in Melbourne, Moreton in Brisbane, Hasluck in Perth, and Boothby in Adelaide.

And seats held by a Coalition member get a bigger share of the funds than seats held by Labor, the Greens, other minor parties, or independents.

Some might say a similar pattern of allocation of small funds, regardless of which party is in government, looks like a fair distribution. But there’s a broader issue: there has been massive growth in these small grants in recent years.

Aggregate federal transport spending has crept up only modestly over recent years, so a bigger proportion of the aggregate is now being directed to small projects – which is the proper and agreed remit of the state or local government, not the federal government.

The spending on small local projects by a national government should stop. Whichever party wins the 2022 federal election should strengthen the transport spending guardrails.

Instead of sprinkling public money on small projects around the country, the federal government should retreat to its proper transport funding role as a national government – no more roundabouts, overpasses, or carparks, just nationally significant infrastructure funded in an even-handed way.

Instead of sprinkling public money on small projects around the country, the federal government should retreat to its proper transport funding role as a national government – no more roundabouts, overpasses, or carparks. Shutterstock