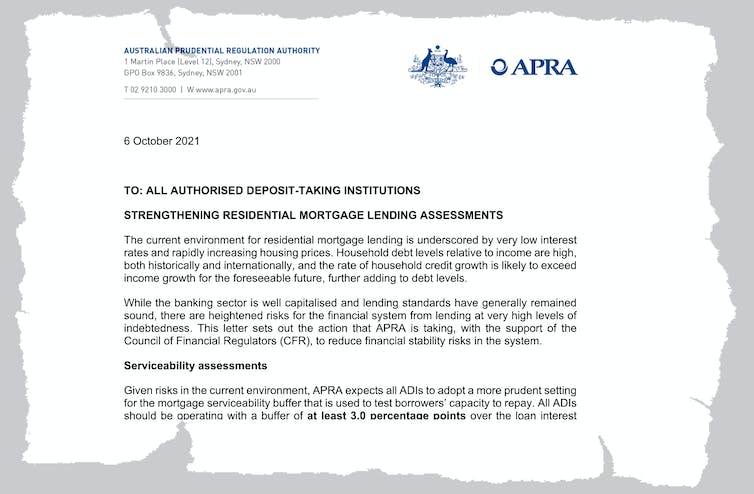 On Wednesday the Australian Prudential Regulation Authority wrote to each of Australia’s home lenders asking them to make it just a little bit harder for Australians to get mortgage.

The letter, addressed to so-called authorised deposit-taking institutions, asked them to adopt a serviceability buffer “at least 3.0 percentage points over the loan interest rate”.

Australian Prudential Regulation Authority[1] What that means is they’ll have to grant loans only where they believe the borrowers can afford to keep making payments should their mortgage rates climb three percentage points. At the moment new variable loans are typically offered something close to 2.8%. The new requirement will prevent lenders from offering such a loan unless the borrower can cope with an increase to 5.8%. The previous buffer, in place for some years, was 2.5%. APRA believes the change will cut the maximum amount available to a typical borrower by about 5%. But it says given that many borrowers borrow much less than the maximum, the overall impact on housing credit growth should be “fairly modest[2]”. Aimed at debt rather than home prices APRA says it is not trying to target the level of housing prices, and it looks as if it isn’t (yet) concerned that lending standards are lax, but it wants to ensure “borrowers are well-equipped to service their debts under a range of scenarios”. Its announcement says increases in the share of heavily indebted borrowers mean “medium-term risks to financial stability are building”. More than one in five new loans approved in the June quarter were at more than six times the borrowers’ income. As prices have surged, borrowers have pushed themselves deeper into debt in order to get a foothold in the market. Read more: Reserve Bank not for turning. No rate hike until unemployment near 4.5%[3] The reasonable benchmark for lending was once considered to be between three and four times the borrower’s income. But as interest rates have fallen and prices have climbed, borrowers have been increasingly prepared to extend themselves. APRA says with the economy expected to bounce back as lockdowns end, the balance of risks meant “stronger serviceability standards are warranted”. The boosted serviceability requirement will also increase the resilience of borrowers to higher interest rates, should they come. Not that the Reserve Bank says they will come for some years; as it tells it, most probably not until 2024[4].

Reserve Bank Governor Philip Lowe has indicated rates shouldn’t need to rise until 2024. APRA is taking out insurance. With global inflation pressures building, there is a risk not only that rates climb go earlier than the Reserve Bank is signalling, but that the increases will be substantial, given how far rates are below normal. The small adjustment to serviceability buffers has been described as a tap on the brakes of the housing market[5]. While this might be part of the impact, APRA’s objective is to reduce the vulnerability of individual borrowers and banks themselves to an increase in interest rates down the track. The biggest impact on the most leveraged borrowers. The most leveraged borrowers tend to be first home buyers and investors. APRA believes investors will be affected the most because first home buyers tend to be “more constrained by the size of their deposit”. Investors are more leveraged and often have multiple loans to which the new requirement will be applied. Insurance, for 2022 So far, investors have been less prominent than usual in the market upturn. APRA seems to think this is about to change. Investors stayed away when home prices began climbing late last year, but returned to the market this year and have been increasingly active. Read more: Home prices are climbing alright, but not for the reason you might think[6] Unchecked, low interest rates combined with Australia’s favourable taxation treatment of property investment could drive a new wave of investor-driven demand well into 2022. Low interest rates are making low-yielding real estate extremely attractive. APRA may be preparing itself for twin threats it sees around the corner – a new wave of investor-driven home price inflation, and the first increase in official interest rates in more than a decade. References^ Australian Prudential Regulation Authority (www.apra.gov.au)^ fairly modest (www.apra.gov.au)^ Reserve Bank not for turning. No rate hike until unemployment near 4.5% (theconversation.com)^ 2024 (theconversation.com)^ tap on the brakes of the housing market (www.afr.com)^ Home prices are climbing alright, but not for the reason you might think (theconversation.com)Authors: Warren Hogan, Industry Professor, University of Technology Sydney