Accelerated tax cuts, cash splashes for pensioners, massive incentives for business to invest and a subsidy to hire unemployed people are the centrepieces of the Morrison government’s COVID-19 budget.

More than 11 million taxpayers will get a tax cut backdated to July 1, giving lower and middle-income earners tax relief this financial year of up to $2,745 and dual income families relief of up to $5,490, compared to their tax in 2017-18.

Australians on pensions and other eligible recipients will also receive a cash handout of $250 from December and another $250 from March next year.

Treasurer Josh Frydenberg said the Australia economy was “fighting back”, with more than half of those who had lost their jobs now back at work. But “there remains a monumental task ahead,” he said, assuring Australians “we have your back”.

“The road to recovery will be hard — but there is hope,” he said

A budget focused on creating jobs delivers multiple measures to boost business activity, and a new plan to subsidise hiring young people who are unemployed for up to a year.

Frydenberg said the Australian economy had been hit hard, but “we have a plan to rebuild our economy and to create jobs”.

The budget has a massive $213.7 billion deficit for this year. It will stay in the red throughout the budget period, with deficits totalling $480.5 billion over the next four years. 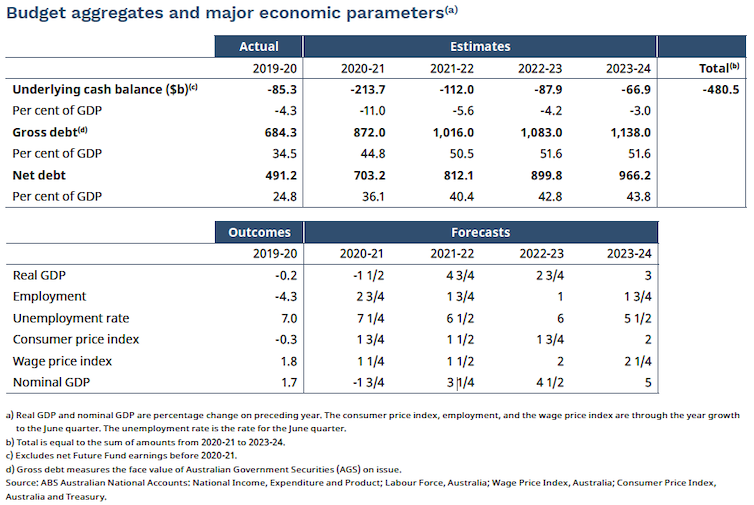 Frydenberg told parliament, “this is a heavy burden, but a necessary one to responsibly deal with the greatest challenge of our time”. The economy is forecast to contract by 3.75% this calendar year, with unemployment peaking at 8% in the December quarter. In the 2021 calendar year, economic growth is forecast to be 4.25%, with unemployment falling to 6.5% by the June quarter 2022. Read more: Budget 2020: promising tax breaks, but relying on hope[1] In his speech to parliament, Frydenberg reiterated the government’s two-phase strategy. The first phase is to focus on “boosting consumer and business confidence, growing the economy and creating jobs”. Once unemployment is “comfortably below 6%” the government will move to phase two, “where there is a deliberate shift from providing temporary and targeted support to stabilising gross and net debt as a share of the economy.” “We will then rebuild our fiscal buffers, so that we can be prepared for the next economic shock,” Frydenberg said. The income tax cuts, at nearly $7 billion, are the biggest cost this financial year, rising to nearly $18 billion in total over the forward estimates. Tax cuts brought forward The government is bringing forward stage two of its already legislated tax plan, lifting the 19% threshold from $37,000 to $45,000 and the 32.5% threshold from $90,000 to $120,000. It is also retaining the Low and Middle Income Tax Offset for an extra year. Frydenberg said, as a proportion of tax payable, compared to 2017-18, the greatest benefit would flow to people on lower incomes, with those earning $40,000 paying 21% less tax, and people on $80,000 paying about 11% less tax this year. “Under our changes, more than seven million Australians receive tax relief of $2,000 or more this year,” Frydenberg said. JobMaker hiring credit and huge tax breaks A new JobMaker hiring credit will be available for employers who take on people on JobSeeker aged 16 to 35. The subsidy will be $200 a week for those under 30 and $100 a week for older people. These new hires must work at least 20 hours a week. All businesses except big banks will be able to use the scheme and the government says it will support about 450,000 jobs for young people. The hiring credit will cost $850 million in the current financial year, rising to $2.9 billion in 2021-22, and $4 billion in total over the forward estimates. The government says the initiative will support about 450,000 young people into jobs. Tax breaks for business are huge over the budget period. From budget night, more than 99% of businesses will be able to write off the full value of any eligible asset they purchase. The concession will be available for businesses with a turnover of up to $5 billion until mid-2022, with the program costing $26.7 billion over the forward estimates. Read more: The budget's tax cuts have their critics, but this year they make fiscal sense[2] Frydenberg described the concession as “a game changer” which “will unlock investment”. “It will dramatically expand the productive capacity of the nation and create tens of thousands of jobs.” In another business initiative, companies will be able to use their losses earlier. Frydenberg said the combination of these two measures would create an extra 50,000 jobs. Infrastructure and water spending The government is also looking to infrastructure to stimulate activity, with Frydenberg saying “the budget will see $14 billion in new and accelerated infrastructure projects.” As part of supporting the regions, Frydenberg announced $2 billion in new funding to build water infrastructure. With women’s jobs particularly badly hit during the recession, the budget has a women’s economic security statement including $240 million in measures. Thousands of new home care packages On aged care, Frydenberg announced an increase of 23,000 home care packages, costing $1.6 billion. He said the government would provide “a comprehensive response” after the royal commission’s final report on aged care, which comes early next year. The government is also implementing reforms to superannuation arrangements. New superannuation accounts will no longer be automatically created when a worker moves jobs. “Under our reforms, your super will follow you,” Frydenberg said. The government had previously flagged that it would implement the change, recommended by the Productivity Commission. Labour described the budget as a “grab bag of headline seeking announcements” which would “rack up a trillion dollars of debt, but still doesn’t do enough to create jobs, fails to build for the future and leaves too many Australia’s behind”. Business welcomed the budget, with the Business Council of Australia saying it was “about getting Australians back to work, and getting businesses back on track”. The Australian Chamber of Commerce and Industry said “Australian entrepreneurs will be energised by the unparalleled investment incentives”. ACTU secretary Sally McManus tweeted: The Community Housing Industry Association said the budget’s extension of the government guarantee for the National Housing Finance and Investment Corporation by $1 billion was welcome but criticised the lack of direct investment in social housing.