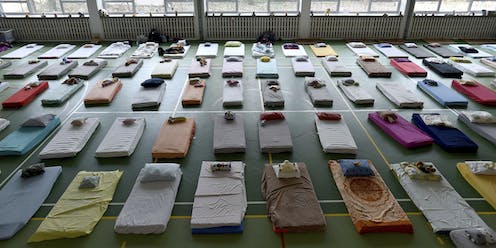 As desirable vacation destinations go, war-torn Ukraine must surely rate low. But in the first month of Russia’s invasion, Airbnb bookings in Ukraine boomed, as people around the world used the accommodation platform to channel more than US$15 million[1] in donations to the country.

As with other forms of direct donation, using Airbnb to channel aid to Ukraine has been problematic. The company was relatively quick to waive the 20% commission it usually charges on transactions. But stopping scammers from setting up fake accounts to collect money from well-meaning donors has proven more difficult[2].

Read more: Airbnb cash transfers to Ukrainians can help, but they're disrupting charities[3]

It’s a story that illustrates both the potential and limitations of the so-called sharing economy.

Idealistic visionaries once imagined the internet would connect individual buyers and sellers, peer to peer (or P2P), without the need for intermediaries and their commissions. But this promise of market democratisation and inclusivity has largely failed to materialise[4].

Instead, the platforms that have arisen – eBay, Uber, Airbnb and so forth – are very much like traditional capitalist enterprises, putting the squeeze on rivals, exploiting labour, and making their founders and executives among the wealthiest people on the planet.

The founders of these companies didn’t necessarily begin with such ambitions. Airbnb’s founders, for example, started their website in 2007[5] to provide an alternative to mainstream hotels and motels, enabling anyone to offer a spare room or residence for short-term stays in the expensive San Francisco market.

Now Airbnb’s market capitalisation rivals that of the world’s biggest hotel chain, Marriott. In 2021, Airbnb reported US$1.6 billion in earnings before interest, tax, depreciation and amortisation, compared with Marriott’s US$2 billion[6].

The fortunes made by the dominant sharing platform have not all come from technological innovation.

Uber, for example, has squeezed taxi cooperatives, reduced wages for drivers[8] and normalised precarious “gig work[9]”. Airbnb has been criticised for contributing to rental affordability and supply problems[10], as property owners chase higher returns from the short-stay market.

There’s little that is democratic about these platforms. The owners have the last say in the equation, dictating which actions and exchanges are allowed or cancelled.

Our research on the sharing economy[12] shows that digital platforms can be a powerful tool for individuals to collaborate in developing solutions to their needs. But for the promise of the sharing economy to be realised, platforms must be far more open, democratic and publicly accountable than they are now.

As the non-profit P2P foundation[13] argues, peer-to-peer networks create the potential to transition to a commons-oriented economy, focused on creating value for the world[14], not enriching shareholders.

For that to happen, all users must have input into decisions about why a platform exists and how it is used.

Read more: The 'sharing economy' simply dresses up our consumerist tendencies in a more palatable ideology[15]

Examples of what is possible already exist. Perhaps the best known is Wikipedia – a hugely valuable service that runs on volunteer labour and donations. It’s not perfect but it’s hard to imagine it working as a for-profit enterprise.

There are many attempts to create collectively owned, more democratic sharing platforms. In New York, for example, drivers have organised to create ride-sharing alternatives[16] to Uber and Lyft based on cooperative principles. Such endeavours are known as platform cooperativism[17].

Read more: Another approach to online platforms is possible: cooperation[18]

But these ventures routinely struggle to raise the money needed to develop their platforms. Members also vary largely in their knowledge of business practices, particularly the skills needed to manage democratic decision making.

To help these platforms thrive, we need public policies that assist them to raise funds. We also need programs that deliver financial and business education to platform members.

Beyond these practical difficulties, users also need to have a stake in how these platforms run for them be a fully transformative version of the sharing economy.

We’ve drifted a long way from the early hopes for the sharing economy. But it’s not too late to change course and work to co-create more equitable, human-focused models of exchange.