I reckon Albo’s on the right track. The opposition leader wants to pay A$300[1] to every Australian who is fully vaccinated by December 1.

The Grattan Institute[2] is on a similar theme. It has proposed a $10 million per week lottery, paying out ten $1 million prizes per week from Melbourne Cup day. One vaccination gets you get one ticket. Two gets you two tickets.

The costs are tiny compared to what’s at stake. Treasury modelling released on Tuesday puts the cost of Australia-wide lockdown at $3.2 billion per week.

Paying people to get vaccinated fits the government’s criteria of a response that’s “temporary, targeted and proportionate[3]”.

And the published research on small payments shows they are extraordinarily effective, often more effective than big ones.

A few years back, Ulrike Malmendier and Klaus Schmidt of US National Bureau of Economic Research discovered that a small gift persuaded the subject of an experiment to award contracts to one of two fictional companies 68%[4] of the time instead of the expected 50%.

Small payments can be more effective than big ones

A gift three times as big cut that response to 50%, which was no better than if there had been no gift at all.

The effect of small payments to pregnant British smokers has been dramatic.

Offered £50 in vouchers for setting a quit date, plus £50 if carbon monoxide tests confirmed cessation after four weeks, £100 after 12 weeks and £200 in late pregnancy in addition to the counselling and free nicotine replacement therapy given to the other pregnant smokers, those offered the payment were more than twice as likely to quit — 22.5%[5] compared with 8.6%.

Never mind that these small sums ought to have made no financial sense.

The gifts were minuscule compared with the money the recipients would have saved anyway by not smoking, yet they worked so well that the researchers estimated the cost of the lives saved at just £482 per quality-adjusted year.

Around 5,000 British miscarriages each year are attributable to smoking during pregnancy. The participants randomly assigned the offer of a payment not to smoke gave birth to babies that were on average 20 grams heavier[7]. 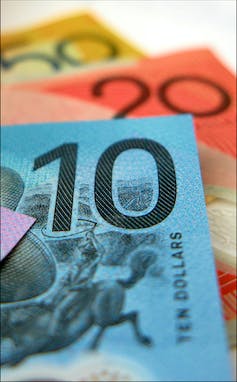 Small change can achieve a lot.

The incentives can be even smaller.

Mai Frandsen[8] at the University of Tasmania has trialled offering smokers half as much — a A$10 voucher on signing up, then $50 per checkup in addition to support from a pharmacist. The results are encouraging[9].

Lotteries are cheaper still. The Grattan Institute’s suggestion of a $10 million per week payout sounds like a lot, but it isn’t when divided by Australia’s population.

Other incentives offered with apparent success in the US include free beer, donuts and (in Washington state) free cannabis[11].

They needn’t work for everyone. A survey conducted by the Melbourne Institute in June found that of those who were willing to get vaccinated but hadn’t got around to it, 54% would respond to a cash incentive.

Of those who weren’t willing or weren’t sure, only 10%[12] would respond to cash.

If you were paid a cash incentive, would you get vaccinated as soon as possible? 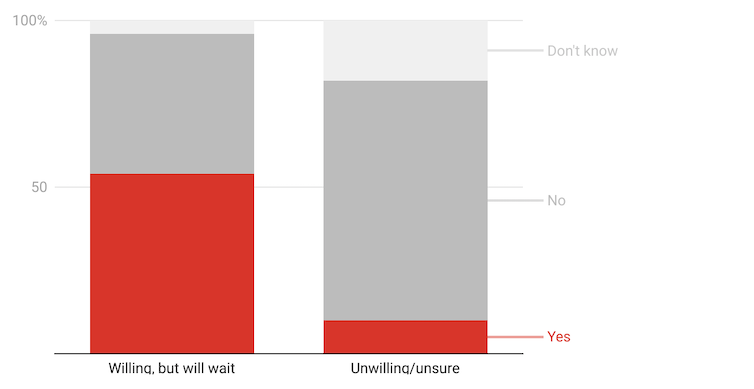 Melbourne Institute Pulse of the Nation survey[13] But the important thing about vaccination is that not everyone needs to do it. The Grattan Institute believes 80%[14] of the population needs to be vaccinated before we can reopen borders. The national cabinet has adopted a lower target: 80% of Australians over 16[15], which is 65%[16] of the population. Vaccination expert Julie Leask[17] says when it comes to child vaccines, most non-vaccinating parents are simply “trying to get on with the job of parenting”. If it’s made easy for them, they’ll do it. Read more: When will we reach herd immunity? Here are 3 reasons that's a hard question to answer[18] There’s not a lot to be gained by trying to reach these who actually don’t want to be vaccinated. Try too hard, and you’ll get their backs up. The tragedy of the government’s COVID vaccine rollout (aside from the difficulties with assuring supply) is that the government hasn’t made it easy. Vaccination ought to be easy The government could have made it easy. When it sought advice last year from departments including the treasury, it was told to do what’s done for the flu vaccine — to distribute it through employers and pharmacies as well as general practitioners, so as to make it almost automatic. The best part of a year later, it’s a view the prime minister is coming round to[19]. Most of us don’t go to the doctor very often — it’s out of our way. Read more: Over 18 and considering AstraZeneca? This may help you decide[20] For a government that came to office promising to slash red tape[21] for business and offered businesses incentives[22] to invest, this government appears not to have fully grasped the importance of red tape and incentives when it comes to health. It might yet. Prime Minister Scott Morrison said yesterday he had investigated something along the lines put forward by Albanese. General Frewen, in charge of the COVID taskforce, said it wasn’t needed “right now”. When the time comes, if we remain under-vaccinated, Morrison can reach for it.