In more than a fifth of Australia’s industries, the two biggest firms control at least half the market[1].

In industries like these there’s a temptation to share the spoils — not to compete too hard on price or service.

How much stronger would that temptation be if both dominant firms in each industry were owned by the same shareholder or set of shareholders?

Neither firm might want to put the other out of business.

There’s evidence to suggest this has indeed been the case in the United States where increases in common ownership have been linked to higher airline[2] fares, more expensive pharmaceuticals[3], and higher bank fees[4].

It’s enough to make you wonder whether there’s common ownership in Australia.

To find out, Andrew Leigh and I collected data from IBISWorld[5] on the firms that compete with each other across Australia’s 443 industries.

We then matched that data to shareholding disclosures for each of the firms listed on the share market and analysed the extent to which competitors were owned by the same investors.

Our findings, just published in Economic Record[6], are troubling.

They identify common ownership in 49 of Australia’s 443 industries.

Read more: Should monopoly businesses have an obligation to create competition?[7]

They are significant industries. The 49 together account for more than one third of Australia’s total industry revenue.

In firms in those industries in which we can identify at least one owner, 31% share a substantial owner with a rival.

Concentration is bigger than it looks

When we modified the HHI to take account of common ownership, the scores of some industries jumped.

Common Ownership of Competing Firms: Evidence from Australia[9] All up, effective market concentration was 20% higher than had been thought. This is a problem because concentrated markets have been linked to a decline in the labour share of income[10], low productivity growth[11] and low investment[12], as well as high prices[13], markups[14] and rising inequality[15] — all challenges Australia is facing. Who are these common owners? They are overwhelmingly institutional investors, predominantly BlackRock[16] and Vanguard[17]. This is unsurprising given one of either BlackRock, Vanguard or State Street is the largest shareholder in 88%[18] of S&P500 companies in the United States. BlackRock, Vanguard and State Street But do they influence corporate decisions? The literature suggests they do. Documenting the channels through which common owners affect competition, Nathan Shekita identifies 30 cases of common owner intervention across industries including pharmaceuticals, oil and gas, banking and ride-sharing. In 2019 BlackRock engaged 2,050 times with 1,458 companies in 42 markets. 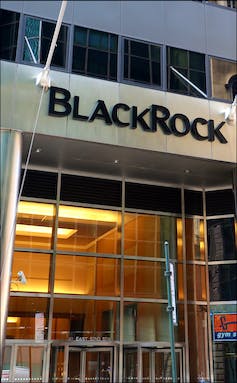 Multinational investment corporation BlackRock. Martin Schmalz provides a case study[19] of how this can occur. An activist hedge fund campaigned in 2015 to have DuPont take a more aggressive approach to winning market share from its competitor, Monsanto. The campaign was opposed by institutional investors including BlackRock and Vanguard. Upon the news that the activist campaign against DuPont had been defeated, Monsanto’s shares rose 3.5%. Schmalz believes it’s possible that these institutional investors voted to maximise the value of their entire portfolio, which included significant stakes in DuPont’s competitor. Our own study has plenty of limitations. We can only see Australian firms that are listed on the securities exchange, we can only observe shareholdings that exceed 5%, we can only see the largest competitors. Read more: Is Australia’s media market one of the world's most concentrated?[20] These data limitations mean we might have understated common ownership. Our findings ought to be enough to get policymakers and regulators looking more deeply into common ownership and monitoring its changes. Only if we “follow money” can we get a true account of what that money does.